The History of the Tooth Fairy | Plancich Dental

Similar to Santa Clause or the Easter Bunny, the Tooth Fairy is an iconic symbol of childhood. Growing up, whenever we would lose a tooth, we were so excited to hide it under our pillow to find that it had been switched with a dollar bill or coin the next day.

But, where did the Tooth Fairy really come from? How did this sprite come to be the way she is famously known today? For National Tooth Fairy Day, our team at Plancich Dental hit the books to discover the origin, and give you some much needed answers! Here is what we learned: 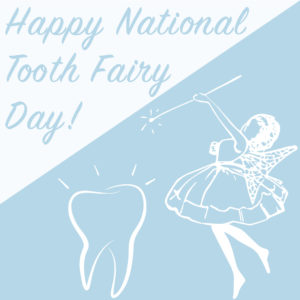 ties into La Petite Souris, or The Little Mouse.

In the legend, a good queen is imprisoned by a evil king, and enlists the help of a mouse. The mouse, later revealed to be a fairy, frees the queen by knocking out the king’s teeth, later hiding them under his pillow.

It was rumored that if a child lost a baby tooth, and it was found by an animal, the adult teeth would grow back to resemble the teeth of that animal. Since rodent teeth are sharp and strong, families would hope that their children’s human teeth would grow back stronger. Hence, La Petite Souris began.

In other cultures, this legend varies to include beavers, dogs, and even squirrels.

So, why does the tooth fairy leave money under the pillow? The idea of exchanging a tooth for coins originated in Scandinavia. Vikings believed teeth to be a good luck charm in battle, wearing them on necklaces. When a child lost a tooth, adults would actually pay their children for a lost tooth. Thus beginning the tradition of tooth-for-currency transaction.

The Tooth Fairy concept didn’t really take off until after WWII. Similar to how Coca-Cola and Cadbury defined the image of Santa Clause and the Easter Bunny, pop culture helped solidify the image of the Tooth Fairy in American media. In the 1950s, comics and cartoons of fairies ran rampant for American childhood.

Character’s like Pinocchio’s Blue Fairy and Cinderella’s Fairy Godmother helped people imagine what she might look like, and solidified the Tooth Fairy as a cultural icon.

However you decide to introduce the Tooth Fairy into your home, this classic legend has  turned the loss of a tooth into a magical experience that expands children’s imagination and continues to inspire proper hygiene care! Contact our office to schedule your child’s next dental appointment today!